Creative Review has interviewed Nelly Ben Hayoun about the launch of the University of the Underground.

To read the full article, follow this link.  Words by Rachael Steven.

Nelly Ben Hayoun has a CV that makes most creative careers sound dull in comparison. She has assembled an International Space Orchestra made up of NASA scientists and directed a feature film exploring what would happen if an asteroid were to collide with Earth. She is also designer of experiences at the SETI (Search for Extraterrestrial Intelligence) Institute, head of experiences at WeTransfer and an adviser to the United Nation’s VR labs. Her consultancy Nelly Ben Hayoun Studios has worked with Google, the Guardian, Wired and the BBC and she is a visiting professor at both the Royal College of Arts and the Architectural Association.

Now, Ben Hayoun has teamed up with a formidable group of designers, thinkers and entrepreneurs to launch The University of the Underground – a free MA programme that aims to teach students how to “design experiences and events that best support social dreaming, social actions and power shifts within institutions, companies and governments”.

The course begins in October this year and the deadline for applications is April 1. It is run in partnership with the Sandberg Instituut (the postgraduate arm of the Gerrit Rietveld Academie in Amsterdam) and forms part of the school’s MA design programme. WeTransfer is a founding partner and the course will be based in London and Amsterdam. Shoreditch nightclub Village Underground has pledged to host the course on its premises for the next 100 years.

Speaking to CR at creative conference Design Indaba – where she gave an immersive presentation on her forthcoming project The Life, The Sea and The Space Viking – Ben Hayoun said it was important to recruit tutors who can inspire students. “It was really important to find what I call the dreamers of the day – tutors that will tell the students that they can positively make changes in this world,” she says.

Tutors also had to have experience of working with governments or institutions and be able to teach students about how systems work as well as how they can be adapted or modified. Students will learn about a particular discipline or form of storytelling – from film-making to theatre – and explore how this could be applied within a particular organisation.

“The way that The University of the Underground is designed is that you learn about political practices, theatrical practice, design practice, film, music, but also sociology, ethnography and linguistics, which we put into the realm of humanities,” says Ben Hayoun. “We teach you all of these different methods that come from each of these disciplines for you to make your own version of what an experience means – [to investigate] how you can use each of the disciplines to actually develop new ways to work with public institutions and do meaningful experiences within these contexts.”

“[A student might explore] how he can use, I don’t know, Greek Tragedy – in the way that Greek Tragedy has been designed, in the way that you try to communicate with a certain set of the audience and create a catharsis – and how you can then apply that maybe to the NHS and getting the public more connected with the NHS by getting doctors to perform a Greek tragedy,” she continues. “That’s just a thought … but we wanted to have [tutors] who are not expected or who are real explorers of things.”

With talk of Willy Wonkas and subterranean spaces, the course might sound a little fantastical – but it has a clear structure. The first year will consist of workshops covering performance, design for public engagement, politics, directing and production as well as field visits to conferences, theme parks, laboratories and political institutions.

Students will work on five creative briefs as well as live events at Village Underground and a still-to-be-announced Amsterdam venue. “Right now, we are working with the British Film Institute to develop a project where we will be talking about the importance of film-making to the government and how it might evolve – so the student will have to reflect on that and design an experience that can communicate this importance [of film-making] and the way that film has developed, and they will have access to the entire archive of the BFI,” says Ben Hayoun.

In the second year, students will design events and experiences in collaboration with an institution or expert and work on a larger project to create change within an organisation of their choice. “I hope one student will pick Fox Studios, for example, and actually go and hunt the Hollywood system of developing film-making and renegotiate and re-think the way that storytelling is being done and the way it’s being developed, and what power structures are in place, and how can you modify them to develop experiences that are meaningful,” she adds.

The UoU Foundation has put out a call for students who are “bold, very hard working and engaged” – students who can become “Willy Wonkas of modern times”. As with most MA programmes, there is an expectation that they will have already developed their own practices and passions and will come prepared with ideas for how they can effect change.

“We can’t tell you how we want [students] to be when they come out. That’s impossible, because I’m really curious to know how they are going to take on that learning … but we need to have students who are going to be really bold and unapologetic about their creativity,” says Ben Hayoun.

“[We want] students who are going to be able to strive through all of this total bombardment of disciplines they are going to go through during the first year and actually really take that learning and make it their own. Because otherwise, it’s going to be difficult for them to take things on from Greek tragedy, from political speechwriting, and still be able to remain an entity. We don’t want to challenge their identity – we want them to remain themselves – but we want to break apart the learning they had before and invade them with an awful lot of information.”

Ben Hayoun hopes the course will offer a more hands-on learning experience than traditional MA courses. It will also have a greater number of tutors than students. If it proves successful, the plan is to launch similar programmes in other cities around the world and build a global network of “creative soldiers” who can challenge the status quo. 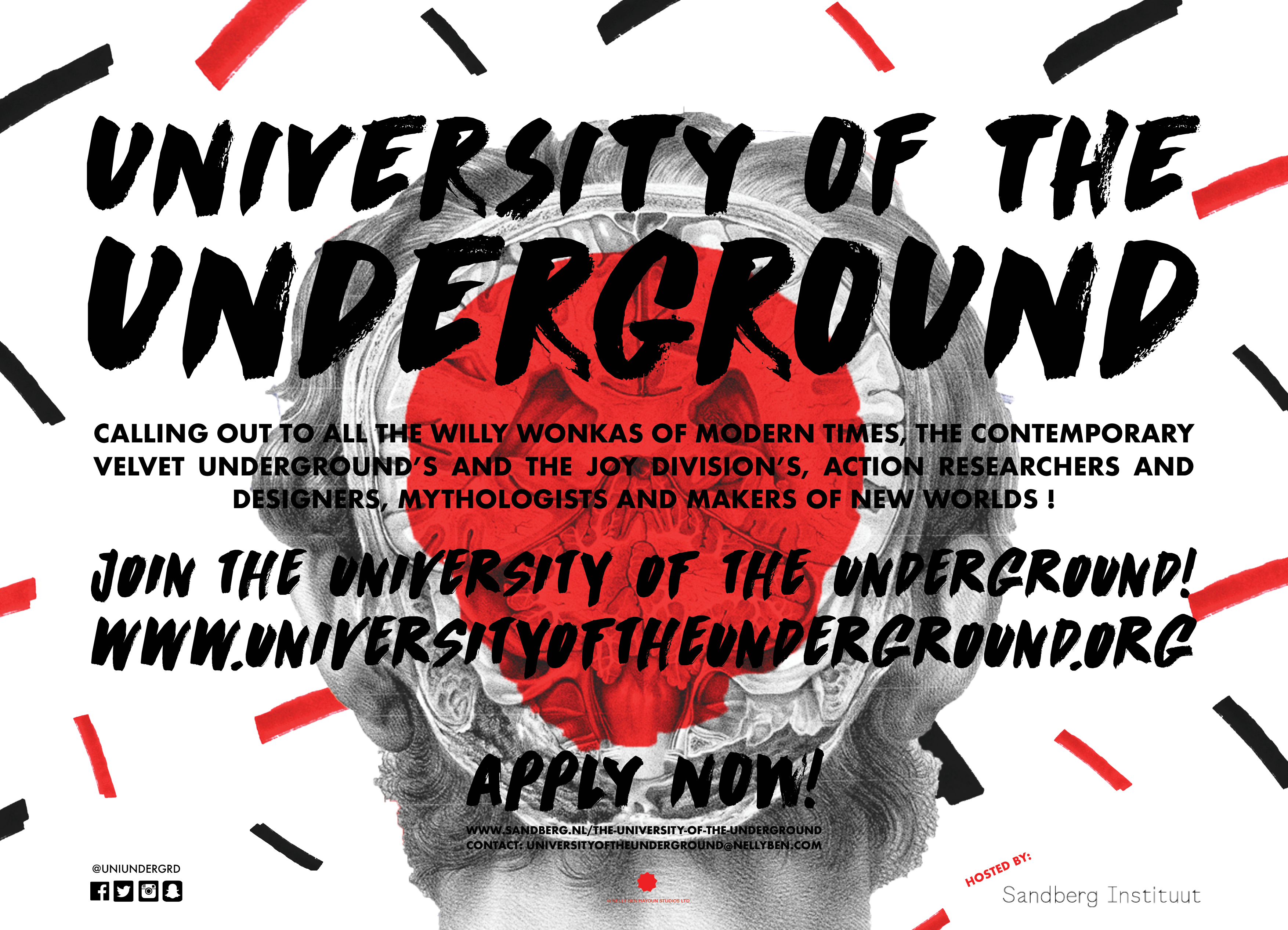 “We don’t want the foundation to stay in Amsterdam and London, we want to expand into every continent and we will make this happen,” says Ben Hayoun. Other courses will also be held in subterranean spaces – Ben Hayoun believes this is vital as students will be expected to re-imagine institutions from the ground up. It also conjures up images of rebellion and revolution.

“It’s important that [students] understand there is a scale to things, the same way there is a scale and system involved in each functioning of each institution,” she says. “We want our students to expand the bottom of life, in order to climb it, and maybe potentially become the next President of the United States or the United Nations and basically challenge their own disciplines and achieve these things where you don’t expect creative people to be. I think it’s so important now that we lead creatives into places where they can really make proper change. But change takes time – that’s why we have this 100-year commitment.”

With creative education becoming increasingly out of reach to all but the wealthy, courses like The University of the Underground show how industry and educational institutions can work together to provide more affordable courses. (The Sandberg Instituut is hoping that 80% of the cost of scholarships will be funded by philanthropic donations and 20% by government grants). WeTransfer sits on the advisory board – “but they are not actually inside the course” says Ben Hayoun, and students retain their IP.

“We are trying to figure out new ways to actually support education but at the same time [retain] this element of freedom,” she explains. “Just because a brand or company is donating to The University of the Underground does not mean that they own the work of our students.” The long-term aim is to create a more inclusive and diverse education model that is less focused on specific disciplines such as product design and more on using creative thinking to effect change in areas outside of the creative industries.

“We believe the designer nowadays is not just making tables and chairs. They have a multifaceted role and in that multifaceted role, you can be a producer, a director, a mythologist … we want to support creative entrepreneurship, which is pretty much the way things are developing in the tech world, and the innovation world, but not in education,” says Ben Hayoun. “We are trying to invent a new system, and we don’t know if this is the right one, but we are going to give it a try and we will try it for the next 100 years.”

Find out more about The University of the Underground and how to apply for a place on the course at universityoftheunderground.org. Nelly Ben Hayoun was speaking to Creative Review at creative conference Design Indaba. See designindaba.com for details.