Merry Christmas to you dear readers! The NBH Studio team has now traded their work outfits for some dazzling Santa costumes (with glitter, lots of it!) in order to deliver to you some breathtaking projects…right at your virtual doorstep! Forget about a silent holy night drinking eggnog, gorging on gingerbread and doing lip sync battles over Wham!’s greatest hits! Take your protein pills, put your helmet on and come fly with us to outer space with our International Space Orchestra or jump aboard our yellow submarine and dive right into the abyss with Nelly and a wild team of scientists and musicians for The Life, the Sea and the Space Viking!

2015 might have ended with a bang but 2016 is about to start in full swing so fasten your seatbelts and get ready to enjoy the ride! 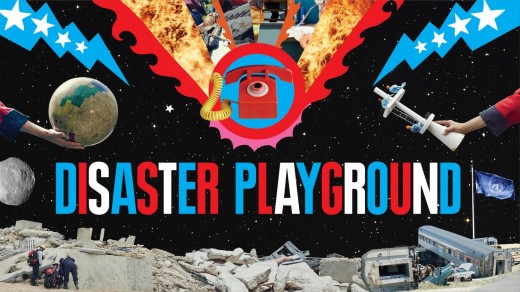 Tired of watching the same old reruns of Home Alone, Miracle on 34th Street or Jingle All the Way for the holidays? This Christmas, let Santa and his herd of reindeers drive you all the way to space to watch ‘Disaster Playground’ !

NOW AVAILABLE ON ALL DIGITAL PLATFORMS (Netflix, iTunes, Amazon Instant Video, GooglePlay, Vudu, Vimeo on Demand Etc…) on www.disasterplayground.com with many bonus footages. AND SOON SET FOR RELEASE ON DVD via film distributor KINO LORBER on February 23rd 2016! Through its varied group of labels, Kino Lorber, Inc. offers the best in contemporary, classic and documentary films that aim to engage, provoke, stimulate, and entertain today’s audiences. Visit them to see more about their roster on their website.

-One of Indiewire’s six highlights of SXSW 2015, while competing in SXSW Feature Documentary, Vision Category which promotes ‘audacious filmmakers, risk-taking artists in the new cinema landscape who demonstrate raw innovation and creativity in documentary and narrative filmmaking’.
-Singled out by SXSW Film Director Janet Pierson as ‘pretty nuts’.
-Selected at Sheffield 2015 in the Artefact category, raved by SoundOnSight as ‘bombastic’
-Selected at CPH:DOX 2015 in the Hits section, “Highlights from the documentary scene around the world.”

Find out more about Disaster Playground in this Q&A with Nelly and Dr Franck Marchis Senior Planetary Astronomer and exoplanet chair at the Carl Sagan Center of the SETI (Search for Extraterrestrial Intelligence) Institute, chaired by Guardian Design and Architecture Critic Oliver Wainwright which followed our London Premiere (June 2015) at the legendary BFI (British Film Institute)!

International Space Orchestra in Space: To infinity…and beyond!

The Life, the Sea and the Space Viking

Thought you already reached for the stars with Disaster Playground and couldn’t get any further? You ain’t seen nothing yet! NBH Studio is now following in Jules Verne’s footsteps for an epic journey, 11 kilometers under the sea! A wild and unique project set for release in 2017.

“Nothing is impossible, the word itself says I’m possible!” once said actress Audrey Hepburn. Discover how Nelly turns this motto into reality within the world of design by watching her latest talk, where she invited the audience to join her on stage, for the AIGA National Design Conference conducted last October in New Orleans, USA and chaired by the creator of the 99% Invisible radio show Roman Mars!

WeTransfer is ready to make some noise!

Our friends at WeTransfer are up to some exciting adventures! Troy Carter, the marvel of the entertainment business and the man who skyrocketed Lady Gaga’s career has now joined the board of the company! With this incredible news also comes the launch of a new curated music streaming service, to be available on the first quarter of 2016! Find out more about these two milestone events here and here!

Nominated for a Women of the Year Achievement Award

This year, in October 2015, Nelly was nominated for a 2015 Women of the Year Achievement Award, which rewards, since 1955, women ‘who have made a significant achievement’ and ‘are being recognised for their strides in making the world a better place’. The ceremony was hosted by Women of the Year President, Sandi Toksvig, and the awards were introduced by actress Nicole Kidman at the Intercontinental in London.

Time to SUPPORT AND DONATE to 2 essential campaigns with NBH Studio.

– Every day, Scientists at the SETI Institute rack their brains in order to explore, understand, and explain the origin and nature of life in the universe, and to apply the knowledge gained to inspire and guide present and future generations. Time to give them a hand! This Christmas, it’s your turn to support the most unique research and help NBH Studio’s partners and friends from the SETI Institute raise $500,000 by the end of 2015! Don’t let their brilliant discoveries go to waste and have their programs shut down. Donate now here.
– Nelly’s greatest inspiration, dear friend and powerhouse fundraiser Liz Monks, a woman of passion and real dedication, has sadly passed away after a long battle with cancer last November 2015 at the Royal Free Hospital. Don’t let this happen again and support her last fundraising campaign. Support cancer research and help Liz, the Royal Free Hospital and Macmillan raise £50,000 by donating here.