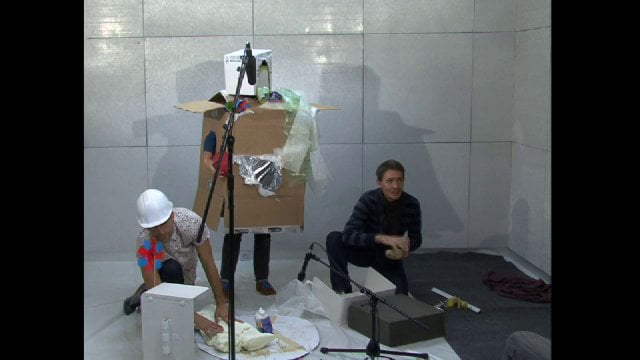 A workshop by Nelly Ben Hayoun
With the participation of Dr. Francis Rocard, CNES Paris
and Foley Artist Sue Harding

THE SPECTACLE ON THE MOON

A workshop developed as part of MOON DUST REMIX, residency at  La Gaité Lyrique, Paris, with support from British Council

Apollo 11, has been a topic for many suspicions. Ranging from Bill Kaysing’s pamphlet “We Never Went to the Moon” to the plot seeing Stanley Kubrick and NASA collaborating to manipulate the masses by designing sets and the event itself.

Looking for moon dust and the sound of Neil Armstrong’s ‘small step’, Nelly Ben Hayoun is on a quest to recover that lost data. With the assistance of lunar scientists and Foley Artist Sue Harding, you will speculate on this sound, that moon walk that changed the way we understood gravity and the use of technology for space travel.

You will propose you own interpretation of what it could have been/ what it should have been. You will act on History and participate to this spatial experience.  Between Science Fiction and reality we will aim to hear together what it sounded like.

You will become players of a Moon Chorus by foley-ing Apollo 11 historical event.

Foley is the making, design and performance of everyday and background sounds, usually happening in the filmmaking discipline. These reproduced sounds can be anything from the swishing of clothing and footsteps to squeaky doors and breaking glass.

Foley creates a sense of reality within a scene.